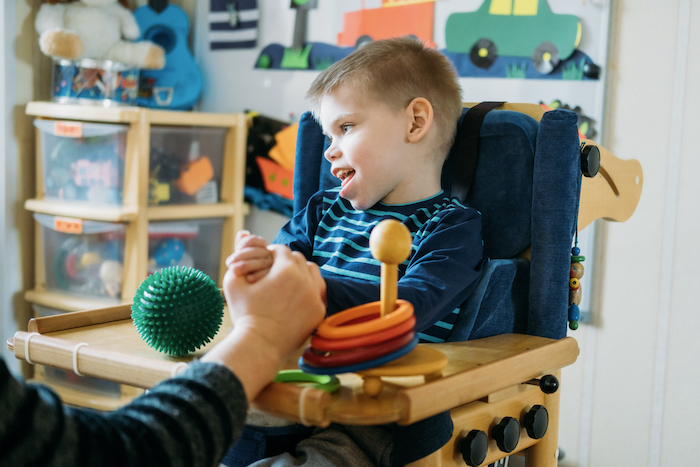 Find out what cerebral palsy is and how it is treated.

What is Cerebral Palsy?

Cerebral Palsy (CP) is a condition of the central nervous system (brain, cerebellum, spinal cord) and is caused by damage to one of its parts that does not progress over time. It was first described in 1860 by the English surgeon William Little. The disease is characterized mainly by movement disorders, speech and hearing problems, sometimes with intellectual disability and epilepsy. It is classified into the following categories according to the clinical picture of the patient and the topographical distribution of the motor disabilities: Hemiplegia, diplegia, tetraplegia, athetoid cerebral palsy and ataxic cerebral palsy.

Infants with cerebral palsy have muscle weakness, lack of muscle tone and, later, muscle spasticity and lack of coordination.

In a child with cerebral palsy, other symptoms may include salivation, speech impairment, difficulty controlling the bladder and/or bowel, seizures, hand tremors, and inability to locate objects by touch. Children with this disorder may experience visual impairment more often than other children. Usually children with cerebral palsy may have average or above average intelligence. However, there may be mild or severe impairment of cognitive function in some patients.

Cerebral palsy can be classified into 4 different types:

Cerebral palsy is caused by abnormal brain development or damage to the developing brain. This usually happens before a child is born, but it can occur at birth or in early infancy. In many cases, the cause isn't known. Many factors can lead to problems with brain development. Some include:

Cerebral palsy is a relatively rare disorder that affects men and women in equal numbers. The United Cerebral Palsy Association estimates that between 1 in 1000 and 3 in 1000 infants develop cerebral palsy each year in the United States.

An important part of rehabilitation for people with cerebral palsy is Physiotherapy, which focuses on developing and retraining movements as close to the normal patterns as possible. Sometimes the use of aids such as splints, braces, stools, wheelchairs, etc. is indicated. There are many neurodevelopmental techniques such as Bobath, PNF, Vojta, hippotherapy, specific hydrotherapy techniques, etc. In addition, it is necessary to stretch the spastic muscle groups and strengthen their competing muscle groups in order to reduce the contractures and permanent deformities.

The aim of Occupational Therapy is to help the person through targeted activities and therapeutic methods to carry out his/her daily activities, reaching the maximum degree of autonomy. Occupational therapy intervention has as its main concern the support of children in order to integrate smoothly and fully into the school environment and to develop their social activities.

The proper use of adapted equipment and adaptations in the environment (home, school) is an important part of occupational therapy intervention, which tries to create a functional environment for the child with cerebral palsy.

Speech Therapy is an important part of the rehabilitation team for children with a brain dysfunction. Approximately 65 - 70% of these children have some speech difficulties. Difficulties range from slight abnormalities of articulation, such as a slight dysarthria, to a complete lack of verbal communication. The aim is to give the child as much control over the speech organs as possible so that he or she can speak freely and express their needs.

There is no medication that "cures" cerebral palsy, as brain damage is irreversible. However, groups of drugs such as antiepileptic/muscle relaxants are important aids in limiting seizures and/or anticholinergic drugs, which can help control urinary incontinence.

In some cases, surgery may be performed to lengthen and transfer tendons in patients who have severe muscle contractions associated with cerebral palsy. This procedure can be done in several areas of the body, including the elbows, shoulders, and back of the heel.

Cerebral palsy is a life-long condition, meaning that the brain damage that causes it will not go away over time. However, it is important to remember, that the brain has neuroplasticity, which is the ability to rewire itself and reassign affected functions to undamaged areas of the brain.

Additionally, early intervention is key to improving several functions, because children’s brains have greater levels of plasticity than adult brains.

From the Synopsis Team